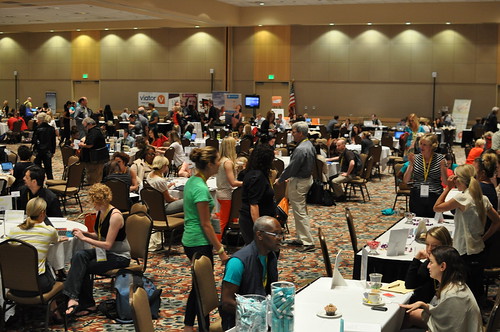 It’s easy for us freelancers to just hole up in our home offices or in a corner of a coffee shop, feeling like we’re still connected and productive because we’ve got tabs open with Twitter, Facebook, LinkedIn, Quora, Prismatic, FourSquare, or whatever communication flavors of the month are hot. “Look at me, I’m networking my ass off!”

Mostly though, that’s all just noise. Sure, 15 minutes a day of that may accomplish something, but the rest of the time it’s just keeping you from doing work that will actually make you money. The hard stuff. The meaningful stuff. The work that will still be read a year or two from now.

What is really useful networking though?

Spending real money and time going to the right conferences.

There you’ll meet actual humans face to face. You’ll accomplish more in a couple days sometimes than you did in months of virtual water cooler chatter. The more I do that, it seems, the more my business grows.

Here’s what happened when I went to Colorado for TBEX this past June—and why I’m already registered for the Toronto one too.

That’s all in addition to what I actually learned in the seminars, things I can apply to my business and career. How long would it have taken to accomplish all that by phone and e-mail? A month? Two months? Infinity?

A week and a half ago I went to TravelMart Latin America as a reporter, covering it for the Luxury Latin America travel site. Besides learning what was new and interesting so I could share that with readers, here’s what’s come out of it already:

Your mileage may vary of course, but I’ve had outcomes like this from all kinds of acronym-laden conferences I’ve been to. Some have been better than others, but none has been a complete waste, even when I’ve had to pony up airfare and hotel expenses.

Get out there and mingle with warm bodies. You’ll be surprised how much you can get accomplished, even if you don’t log onto social media once for days on end.