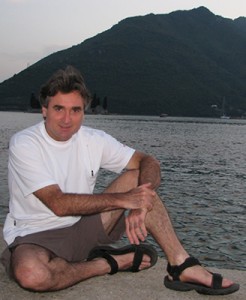 Bruce Northam and I go way back and I feel like we’ve been joined at the hip for ages, with his Globetrotter Dogma book showing up next to my World’s Cheapest Destinations one on Amazon for “If you liked that, you might like this” recommendations. He’s been a regular at Perceptive Travel since its founding and has even let me sleep on his spare futon in Manhattan. He’s the writer and host of American Detour and has reported from 125 countries on seven continents. His next book is a compilation of modern wisdom from those countries.

My initial goal was to hit the lecture circuit as a travel guy, both via urban seminars and on campuses. The best way (back in the early 90s before ‘anyone’ could self-publish a book) to get speaking gigs was as an author/expert. My first book, The Frugal Globetrotter, made me a well-paid hit on campuses for five years. My other books, In Search of Adventure and Globetrotter Dogma, kept that roll alive … but these days, being handsomely paid to rant about freestyle wandering to college kids is an uphill limp. That party seems to be over … unless my (or your) next book is a real dazzler. Never give up.

You’ve written about a lot of crazy, out-there adventures over the years in what were once untouched places. How do you keep from getting jaded and cynical as the world becomes smaller and once-secret places become tourist traps?

I Don’t. They key is to not talk about ‘how it used to be better’ with younger travelers: virgin turf is virgin turf for newbies, who will be thinking the same thing when they come back to what was a cool place in 10 or 20 years and find it overrun.

then figure out how they all fit together. Tell us about your writing process for a feature story.

My archetypal Blackberry (pen and paper folded into eighths) sends me home with dozens of sheets of paper, which after notes entry, becomes a jigsaw puzzle of thoughts. Once there is a flow I walk away for a week or a month, then turn it into something. I will always believe that travel writing is NOT breaking news.

Prior to the savage 2008 economic downturn, most web-only travel columns didn’t get much respect. Now, industry insiders and previously smug print editors tip their caps to capable sites. Just before the 2008 greedy banker shitstorm, I started adding travel videos (American Detour) to my platform and, although it is MUCH more involved and difficult than simple travel writing, it’s paying off. Down the line, I’m betting that my video series will open many doors and create wealth. I write my own American Detour voiceovers. Writing for a 100% visual format has reinvigorated my writing style … sort of like being born again out of the jade that colors many veteran travel writers. In three years, barring further economic melt or massive terrorism, it seems like everyone will have a show, blog, column, etc … will there be a market? We’ll see … in the meantime, keep on keeping on.

Don’t beg editors. Write with passion and wait until you make a real connection with a magazine, agent, or publication … good writing is timeless, or at least should be. Beware of self-publishing, although you’ll only take 15% of a legitimately published (agent, contract, etc) book, the book won’t be a hackpack with a floppy cover and embarrassing typos. The nightmare of self-publishing is distribution … when bookstores send unsold books back, YOU pay. If that happens twice (or more) you’re screwed. Just as someone in a court is considered a fool to defend themselves, publishing a book without help from a professional editor is journalistic suicide.

And please don’t ever introduce a travel story with “The car rental agent in Dublin was really nice.” … or … “I was the first Western person there!”