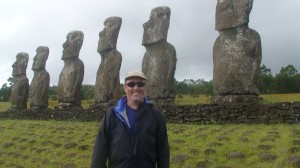 Editor’s Note: We are leaving this old interview up in case anyone is interested in how things change for a blogger over eight years of writing and photography. To see a more current version though, go here: Catching up With Gary Arndt.

In March 2007, Gary Arndt sold his internet consulting firm and, having had a rather slim travel history, decided to pack up and travel around the world. Now, he has one of the biggest collections of National Geographic magazines and one of the most popular travel blogging sites on the internet, successfully merging his love of technology and travel. Check out his blog to see where Gary is today!

There are a zillion blogs out there that are following a similar, “Look at me, I’m traveling around the world!” playbook. How did you make Everything-Everywhere stand out and what has made it one of the most popular single-person travel blogs on the web?

1) Most people go on a trip and then the trip ends. It takes a long time to build up an audience, however. So most people just don’t travel long enough to reach that tipping point. Even if they did reach that point, the interest in their site would probably wane once they stopped traveling. I have been traveling for a long time and plan to keep on traveling.

2) I had an early mover advantage. I started before most of the “me too” sites were started.

3) I have a business background and take the marketing of my site very seriously. Most people just assume that they’ll become famous. It doesn’t work that way.

4) I put a big emphasis on photography. People like photos and they can be consumed quicker than an article. I take my photography seriously and have invested in it.

Where do you see your career as a travel writer being three years from now?

I started a blog when I began traveling. The keys to my success have been internet marketing and constant attention to the site.

Write for yourself and not others. It is the only way to create a brand.

What are your primary sources of revenue and how do you see that changing in the next couple years?

I have made a conscious effort to focus on building an audience and not worrying about monetization. I do not know what the industry will look like in 5-10 years, but I know no matter what happens, the one thing you want to have is an audience.

I am currently working on a book which I hope to have on the shelves in 2011. I am going to get 3-5 corporate sponsors and work with them. This will be a partnership beyond just banner advertising and include content creation, public speaking gigs and other off line promotional efforts.