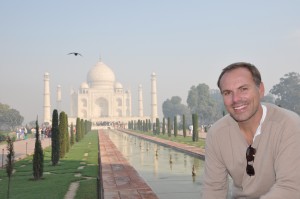 Johnny Jet is a guy who gets around: traveling an average of 150,000 miles and visiting over 20 countries each year, Johnny’s website is known as the “first stop” for both budding and expert travelers. Besides being frequently named “one of the top 10 essential travel resources on the internet” by such publications as the L.A. Times, his website, JohnnyJet.com, has been cited over 2,000 times by major news stations, talk shows, and other writers.

I’ve met you many times over the years and you’re always awake and smiling, no matter how many time zones you’ve flown across. How do you get all your work and socializing done and still stay well-rested?

I love my sleep and usually get at least 7-8 hours a day.  Sometimes I take naps to conquer jetlag but the secret is I rarely stay out late so after dinner instead of going to the bars I go to work. I also work whenever I can. I bring my Blackberry to answer emails and update Twitter/Facebook and work on my laptop in my room and on the planes. It’s fun because I love what I do.

Just got lucky. I used to be afraid to fly – started learning all kinds of tips and began helping others. My story is on this page http://www.johnnyjet.com/folder/aboutjj.html

Hopefully, it will be more of the same. I love what I do. Would like to earn more $, bring on more people to help and have a TV/Inter

I would network my tail off. Go to travel conferences make friends with people like myself, you, GoNomad, Chris Elliott and try and write for them for free just to get my name out there and be active on social networks like Twitter and Facebook.

What’s next for Johnny Jet? What are you and I going to be talking about in 2011…or later?

John E. DiScala (a.k.a. Johnny Jet) travels around 150,000 miles and visits over 20 countries each year. He and his website JohnnyJet.com have been featured over 2,000 times in major publications, including USA Today, Time, Fortune and The New York Times, and he has appeared on ABC, CBS, CNBC, CNN, MSNBC, NBC, FOX News Channel and PBS.  JohnnyJet.com has been named “one of the top best money-saving web sites for travel” by Budget Travel Magazine, while  the L.A. Times calls it “one of the top 10 essential travel resources on the internet.” Outside Magazine touted Johnny for having one of the world’s best “dream jobs”. Every week, Johnny hosts a “travel website of the week” for several radio stations around the country, he writes weekly for Frommers.com and he has written for USAToday, The Boston Herald, LAX Magazine and Coast Magazine.  Sign up today for Johnny Jet’s free weekly travel newsletter at JohnnyJet.com.