Michael Luongo’s award-winning travel writing earned him the 2011 LGBT Journalist of the Year for the National Lesbian and Gay Journalists Association and the 2010-2011 Grand Prize in Travel Journalism Award Winner for NATJA. His work, which he characterizes as largely focused on travel, culture, and human rights, is always out of the ordinary (not to mention both humorous and profound at the same time). Check out Michael’s website (and read about his book projects) here!

Success is relative, as if you measure it financially, it has never been that successful. However, I have been in many great publications, and have been able to do, in my mind, much of the work I wanted to do. I got my start in terms of breaking into travel writing, academically. My Masters was Urban Planning, with a concentration in tourism at Rutgers University. I started publishing academically, initially on gay tourism, and that started my publishing career. From there, I did work for commercial gay publications, with a two month trip through South America, paid on my own dime, pitching to publications, really my start in 2000, looking at the continent, and in particular gay travel there, when fewer writers did. Each thing you do, while maybe not doing well financially, is experience for other things. So one clip and one tough travel experience leads to others. I don’t suppose in 2000 I would have imagined eventually doing travel books for Frommers, articles for the New York Times or National Geographic Traveler, Bloomberg and other publications, but that was the eventual pathway.

What I would like to do more of are novels, screenplays, and plays, based on my travels. I have to find more time to do these longer, larger projects, than what an article is. I have a published novel, The Voyeur, but it’s not about travel. The more I see things, the more I want to put into words things that could never be part of an article, in particular, I have been working on some longer projects from the war zones I have visited. It’s a matter of finding the time to do it. I think income streams must be more m

ixed, as really, it is harder and harder to make a living doing this – part of it is that so many places want things free. I also see myself going back for a PhD eventually, and I have thought to examine redevelopment of tourism during and after conflicts.

I have a phrase I call polite persistence, being in touch with editors, never taking no at face value, making a no a not now but maybe later, keeping doors open. I might want to work harder at a part time job to make more money to have in the bank. I do highly recommend writers have a “day job” they can come back to, if possible, but one which is low stress. I would also say be aware of opportunities, be resourceful. Find ways to combine writing with other work.

I think I talk a bit about this above, but being resourceful, being flexible, being able to keep a day job which is something that is not too time consuming or stressful, but one you can come back to. I think taking this back, any job can be stressful, but one you don’t bring home with you. So a regular schedule in retail or other work that you can do within blocks of time, temping, leaving you with a clear mind for writing or travel, something where you don’t oversee people or projects. But you must always write, always submit, always look for opportunities, always network, always talk with other writers. Easy in New York where I live, but university towns, online, things like that. And you don’t have to travel to be a travel writer. You can write about where you live too. I will add it is very tough financially, and very tough in terms of relationships with your partner and your family. 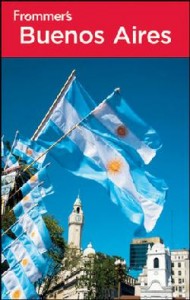 You teach travel writing workshops at New York University. I’d love to hear your perspective on how teaching has helped your writing career, both professionally and aesthetically.

I think there is a certain prestige to being a university professor, though prestige is one thing. We don’t even get free gym benefits at New York University as adjuncts. But we can use the library. I will say it has been great teaching students – I LOVE teaching, really love it, helping students get into what I call the “Zone” where they get into their creative highs, where they can recall everything, every sound, smell, sight, taste of a trip. It also is great to hear how others describe the same things you do. A lot of my students take my class, called the Global Traveler, and have been to Buenos Aires and take it knowing I have lived there for my Frommers Buenos Aires guidebook but each experience is different. Most of my students are also women, and this perspective on travel can be very different from a man’s.

Much of your work deals with tourism in conflict zones such as Iraq and other parts of the Middle East, including Syria, Palestine and Lebanon. When I heard you speak at the NATJA conference in October, you mentioned that these are places you have long recommended travelers visit. Could you speak a little bit about why you feel this is an important area to visit, and what do you say when people tell you it’s just far too dangerous?

A lot of what I write about changed after September 11th. I was like, travel should be about connecting cultures, not being afraid of other cultures, and that on both ends – we are ambassadors of our own country. While there is no excuse for terrorism, I think we have to be aware of the background, or blowback in CIA speak of what 9-11 was, a reaction to our own imperialist policies, where we create a 9-11 every day within some countries. In any case, I think most places called danger zones are still accessible, whether Kabul, parts of Iraq, and other parts of the Middle East. The West Bank is full of beauty, but people are often afraid to venture because of the wall. I also have always found the worst places are the best places in terms of how welcoming people are. Haiti I remember being amazed how much people wanted to help me whenever I was lost. There is also the real economic importance to travel and how much conflict impacts economies. We see within the Middle East, the vagaries of this, and how warnings impact jobs and lives in real ways. In terms of danger, I should also think we can look at statistics within the United States about how dangerous it is – more people die from gun shots in the United States than any other developed country. Danger is relative and about perception sometimes. At the same time, any visit to a conflict zone must be done with a level of caution and awareness. But if you’re not curious, what kind of travel journalist are you?

Michael Luongo is an award winning freelance journalist and photographer based in New York and living part time in Argentina. He is one of the few travel writers frequently gossiped about in the New York Post’s Page 6. His work is focused on Latin America and the Middle East, and he has been to all seven continents and over 80 countries. His specialties include conflict zone travel, business travel, gay travel and other travel topics, and he also writes frequently on human rights issues. His writing and/or photography have appeared in the New York Times, Bloomberg News, Out Traveler, National Geographic Traveler, Gay City News, The Forward, The Irish Times, Conde Nast Traveler, Town & Country Travel, and many other publications. He was the 2011 LGBT Journalist of the Year for the National Lesbian and Gay Journalists Association and the 2010-2011 Grand Prize in Travel Journalism Award Winner for the North American Travel Journalists Association, among other awards from various media organizations. Michael is an adjunct professor at New York University, teaching travel writing, and a frequent guest lecturer and slide show presenter. Michael Luongo’s websites are www.michaelluongo.com and www.misterbuenosaires.com.