Mike Gerrard’s newest essay collection, Snakes Alive, covers an evocative ensemble of award-winning travel experiences:  pick it up and you might flip to his account of eating snake in China, his experience taking a taxi ride through Belfast, or his tale of trekking through the Sinai Desert on a camel. Whether he’s putting together an essay collection, updating one of the thirty guidebooks he’s authored, or simply trying his hand at a crime novel, Mike’s writing, which has won awards both in the U.S. and the UK, beautifully combines a true love for the world, an inquisitive and curious eye, and a lust for the unusual.  Together with his wife, he writes and publishes a number of travel websites, including a travel tips site for the Pacific Coast Highway, which you can visit here.  Check out Mike’s website here!

Trying to predict what will be happening three years from now is very dangerous, because things are changing so fast. Back in March I put out a small ebook reviewing Pacific Coast Highway hotels, to sell on our website. Seven months later it was also available on Kindle and as a POD paperback – neither of which seemed possible just a few months earlier.

Four weeks ago I had the idea of putting out a collection of my travel writing, Snakes Alive, in the same way. Three weeks later the Kindle version was on sale, and this week the Amazon POD paperback goes on sale. These possibilities and the speed at which things can happen is amazing.

So to try to answer that question is tricky. But what I would hope is that I am making most of my money from my own independent projects – the websites, the ebooks – and not being as reliant on publishers and editors as has been the case in the past. I hope I have self-published a few guidebooks, ones that aren’t locked into the dreaded Format of a guidebook series. You know, you must have five luxury hotels in this area, and seven attractions in that area, and you have to have a paragraph on the gay scene because that is The Format. 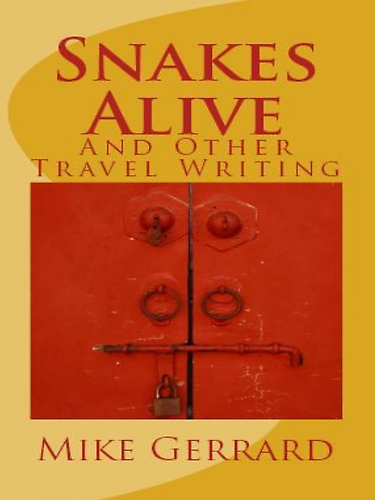 I started adapting to the changing landscape 3-4 years ago, by writing for websites to learn SEO, and then starting my own website. I’d like to be able to say it was foresight, but it wasn’t. I could see that things were changing, but I partly did it because it was new and I like new challenges. But slowly you could see that guidebook sales were falling, fewer titles were being commissioned, the travel pages in newspapers and magazines were changing for the worst too.

So my wife and I started our Pacific Coast Highway Travel website, and recently began another one which is too small yet to be able to say much about. We experimented with our PCH ebook, and the modest success of that one means we’ll definitely do another because we’ve got a great idea for one. We’re also doing a PCH app. Whether apps are the future, who knows, but it’s fun doing it and it will link to our website – our brand, as they say.

I would decide on a niche, a theme, or a destination, and start with that. I would set up a website and a blog right away, and get as much material together as possible, as quickly as possible. I would use all the social media, Tweet like mad, create a persona for myself, have this area of expertise, and let as many people know about it as possible. I’d try to make myself the person people think of when they think of my niche. It wouldn’t preclude you doing other things, but expertise is always useful to establish. When I started travel writing I quickly got known as someone who knew about Greece, and I got a lot of work because of that. If people come to you rather than you having to approach them, that’s so much better.

We all get these emails from people asking how they can become a travel writer. I know other travel writers get them too. At first I answered them at some length, till I discovered that hardly anyone ever wrote back to say ‘thank you’, after I’d given up half an hour of precious time to try to advise someone. Then a travel writer friend of mine, Andrew Sanger, said he now wrote back to people and just said – travel as much as you can, write as much as you can, and send it to as many editors as you can.

That’s the nub of it, and it still applies, except instead of only sending it to editors I would get the stuff in front of as many travel industry and media eyes as possible, including the editors. Oh yes, and think globally.

The problem is that people have their own idea of what a typical travel writer’s life is like. No matter how much you tell them that there’s a lot of hard work involved, a lot of competition, and for most people not a lot of money, they never want to hear that side of it but only believe in the ‘getting paid to go on holiday’ scenario. So you can’t really tell people the truth. Otherwise I would try to explain some of the realities, but at the same time encourage them to have a go. I’ve had some amazing experiences through being a travel writer. Some of them anyone can have, if you’ve got the time and the money. It’s just that what most people do once or twice a year, we do much more regularly. And some experiences are laid on for you because you are a travel writer. For example, I’ve been lucky enough to eat not once but twice at Alain Ducasse’s restaurant in Paris, as a guest. And each time treated to the tasting menu, with wine, and rum afterwards, and more rum. No way would I have had that experience unless I was a wealthy businessman. So having had those experiences, how can you discourage someone from wanting the same?

In your opinion, how does the European market for travel writers compare to the U.S. one in terms of opportunities and earnings?

I don’t have enough experience of the American market to answer that. Even though we now spend more time in Arizona than in the UK, most of the commissioned work we get still comes from UK publishers. If it wasn’t for websites and self-publishing, I’d have been trying like mad to break into more US markets, now we’re here. But I don’t think I need to do that. I’d rather spend the time building our websites and writing another ebook or three.

You’ve written a whole slew of guidebooks over the years and are diving into e-publishing on your own. In your eyes, where’s the book market headed and is it still worthwhile to be a guidebook writer?

I think there will always be printed guidebooks (but ask me that again in three years time). Guides on the iPad and Kindle and other devices don’t seem to me to have the functionality of a printed guidebook. One travel writer recently did a piece trying to navigate a city using a printed guide and an electronic guide, and soon ditched the electronic one. It’s harder to flip back and forth, to look at a map while also checking a list of restaurants. But apps look more interesting. I can see them getting better and better, and maybe eventually providing a better guidebook experience.

It’s still early days, but it’s changing. In the summer I checked the stats on our website for the number of visitors using smartphones, iPads, and other similar devices. It was about 5% of the visitors. That’s still a very small number. But 12 months earlier it was only 1%, and out of interest I checked it again just now, for the last month, and it was 10%. So it’s doubled in less than 6 months.

As to whether it’s still worthwhile being a guidebook writer – I’d say no, not really. Fees are dropping, apart from one or two publishers we work for, and with all publishers the demands on the writer are getting greater. Publishers are asking you to do more and more while paying you less. Some expect you to provide captions, to mark up maps, and they throw things back at you all the time that used to be an editor’s job. It drives us mad when we get an editor asking us to cut one line of text. I mean, it takes them longer to write the email than it would to cut a few words from the text themselves.

There are also fewer and fewer commissions to write new guidebooks. These days it’s mostly updating existing ones, and often it has to be done from the desk because they’ve no budget to pay you to go to the destination. The public are getting increasingly short-changed when it comes to guidebooks.

It may be that for newer writers trying to get that foot in the door, doing a guidebook or an update would be a good move. Anything you can do that helps you get in, and make some contacts, is worth considering. Especially if you do get to travel – and get paid for it!