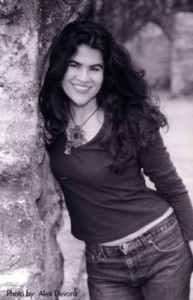 This week, we feature the amazing Stephanie Elizondo Griest. Stephanie, an award-winning nonfiction writer, editor, and English professor, is the author of two memoirs, the powerful Around the Bloc and the poignant Mexican Enough: My Life Between the Borderlands. She was also the 2010 editor for the Best Women’s Travel Writing series and is a passionate activist (she co-founded the Youth Free Expression Network, an anti-censorship organization for teens). In our interview today, she shares her belief in the power of  travel writing as well as her philosophy as a writing teacher and literary journalist. Make sure to check out Stephanie’s website at www.aroundthebloc.com!

How did you get started with travel writing? Tell us a little bit about your story.

Wanderlust is practically encoded in my DNA. My great-great uncle Jake was a hobo who saw all of America with his legs dangling over the edge of a freight train. My father was a drummer for the US Navy Band, and drummed his way around the world. My mother descends from cowboys who migrated from interior Mexico to the cattle ranches of South Texas nearly a century ago. So you could call me a legacy traveler.

As for writing, well, I’m one of those writers who has always known she was a writer. It was almost like being called to the priesthood; I knew it in my gut, in my soul. My only question was how to make things work economically (a question I still ask myself!).

My senior year in high school, I attended a journalism conference that featured a keynote by a rockstar CNN correspondent who’d covered the fall of the Berlin Wall and the collapse of the Soviet Union. His stories of Revolution marveled me. I mean, the only thing that people would take to the streets and shake their fists about in South Texas was football. When he finished, I ran up to the microphone and asked how I could be a foreign correspondent just like him. He looked straight at me and said “Learn Russian.” So I did. Although I barely knew enough Spanish to talk to my abuelita, I enrolled in Russian at the University of Texas at Austin and four years later jetted off to Moscow, in 1996.

I was only 21 years old at the time, yet I knew enough to appreciate that I was there at an extraordinary time. The Chechen War was raging, the ruble was falling, the Mafia had infiltrated every aspect of society. I also knew enough to take notes, mad notes, every single day, even though I had no idea what to do with them.

When I returned to UT for my last year of college, I applied for every grant and fellowship that included a plane ticket. I wound up 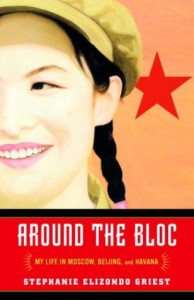 with a Henry Luce Scholarship, which sends 15 young Americans to Asia each year to work on the project of their choice. I begged them to send me to China, even though writers technically weren’t allowed there at the time, and they managed to find me a job editing China Daily (aka the English mouthpiece of the Chinese Communist Party).

Once again, I witnessed extraordinary things, and once again, I took mad notes. When I returned to the States, I had a fierce set of stories. Everyone told me I should write a book, but I was only 24 at the time. I thought I had to wait until I was a whole lot smarter, more talented, and better financed to do something like that. But one morning in the shower, it occurred to me: what if that day never comes? What if this was as smart and talented as I would ever get? Scary thought, I know! But seriously: if I wanted to write a book, I should just do it, no?

That is how my first book, Around the Bloc, was born. It was a whole decade in the making: I basically had to teach myself how to write while I was writing it. Fortunately, I’ve gotten faster since then: my next travel memoir, Mexican Enough, only took three years.

Can you tell us a little bit about the experience of editing the Best Women’s Travel Writing 2010 and 100 Places Every Woman Should Go?

When Traveler’s Tales called me and pitched the idea of writing a guidebook for women, dozens of destinations started flooding my brain. I started scribbling notes, and before I knew it, I’d jotted down 50 places. That was half the book, right there! Then I realized I didn’t want this to only be MY favorite places, so I contacted about 100 girlfriends (and a couple of boyfriends) for their bucket list. I happened to be a writer-in-residence at Princeton at the time, so I also had access to archives and scholars right there on campus, which enabled my research.

After we published 100 Places, Traveler’s Tales gave me a nice little promotional budget, so my publicist and I went on a road trip and held “Traveling Sola” workshops all over the country. I had originally envisioned a young, female backpacker audience, but most of the women who showed up were in their fifties and sixties. Many had just gone through a divorce or had been widowed or had survived some other major life change. Mother Road was calling them, but they had no idea how to proceed. They were all terrified they’d get lost or raped or highjacked by a terrorist. So the book tour quickly became the “You can do it!” tour. It was a fantastic, cathartic experience for us all.

For Best Women’s Travel Writing, I basically received a box of three hundred essays from Traveler’s Tales and had to pick the thirty best. It was quite a challenge, as every single one contained a moment of glory or beauty or triumph, or a galactic injection of feminine energy. They were so inspiring to read, and I developed friendships with many of the writers during the editorial process.

While writing that book, I searched for places of significance to women: where we made history (such as the church where Joan of Arc stood trial), created works of art (such as Frida Kahlo’s studio), and performed miracles (such as the fields of Fatima, Portugal, where Madonna once made the sun do a swan dive over the sky). Also, places where goddesses reside within, like the volcanoes of Hawaii. 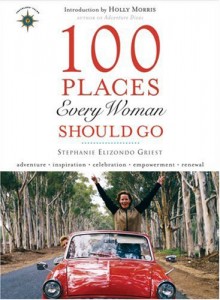 Can you talk a little bit about The Odyssey project? I know you logged 45,000 miles documenting history that is generally overlooked in classroom textbooks—could you expound on the kinds of histories you mean? And as a travel writer, why is it important to uncover and bring light to these alternative histories?

The Odyssey was hands-down the greatest adventure of my life. I was part of a team of eight young activists who spent a year following Howard Zinn’s A People’s History of the United States and rewriting it for a website for K-12 students (www.ustrek.org). Say, for example, our topic was the Stono Rebellion. We would drive out to the historical site, snap a ton of photos, interview any scholars or experts in the area, and chat up any descendants we might find. Then we’d file our dispatches online and drive off to the next historical site. Our goal was to reshape the way history is taught in this country. All too often, we learn only the perspective of the victors in our textbooks. We set out to document the perspective of those who struggled: the migrant workers, the slaves, the indigenous.

What is your teaching philosophy?

In both my writing and my teaching, I strive to give a voice to populations who are disenfranchised or marginalized. I believe writing is empowerment. In my classroom, I teach my students both how to say what they want to say, and also how to help others who have something to say.

Why did you decide to pursue an Master’s degree in creative nonfiction? What did you learn most about writing while getting your degree at Iowa?

I managed to work as a professional writer for about twelve years, but when the stock market crashed in 2008, it became clear this was no longer economically feasible. I was on a major book tour at the time, and nearly half of my speaking contracts for the following year got cancelled. My income literally disappeared. Some writers will write about lip gloss if that’s what it takes to make ends meet, but I just can’t do that. I have to write what matters.

So I ran away to the Ivory Tower, and fast realized that while I had been writing creative nonfiction for more than a decade, I had no formal training whatsoever. I knew nothing about the genre’s history, nothing about its subgenres, nothing about its practitioners. I spent three glorious years at the Nonfiction Writing Program at Iowa—reading, writing, and thinking about my art. Along the way, I discovered that I absolutely love teaching, and that changed the course of my career. I am currently the Viebranz Visiting Professor of Creative Writing at St. Lawrence University in upstate New York, and next fall I’ll be teaching at UNC-Chapel Hill. So what did Iowa do for me? It essentially turned me into a creative nonfiction evangelist!

Stephanie Elizondo Griest has mingled with the Russian Mafiya, polished propaganda in China, and danced with rumba queens in Cuba. These adventures inspired her award-winning memoirs Around the Bloc: My Life in Moscow, Beijing, and Havana (Villard/Random House, 2004), Mexican Enough: My Life Between the Borderlines (Washington Square Press/Simon & Schuster, 2008), and the guidebook 100 Places Every Woman Should Go (Travelers’ Tales, 2007). She won the 2007 Richard J. Margolis Award for Social Justice Reporting and edited the 2010 volume of Best Women’s Travel Writing (Travelers’ Tales, 2010).