Zora O’Neill starts our Travel Writing 2.0 series of personal interviews with the authors who have made travel writing a genre in its own right. (I’ve worked with her at Luxury Latin America and Perceptive Travel, so I know she’s great.) We’re proud to announce this exclusive series and welcome you to stop by every week or so to check out our newest addition! 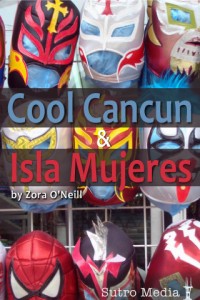 Zora O’Neill is the kind of writer that turns a kitchen into an opportunity for cultural exploration and a street market into a cabinet of culinary wonders. From catering weddings to working in restaurants and writing a menagerie of both cookbooks and guidebooks, O’Neill is a blogger, a traveler, (even an iPhone app designer!), and a fanatic for food and all its eccentricities and delights—check out her complete bio here at http://rovinggastronome.com/

I answered an ad! Really, I’d been trying to get into travel writing for magazines, but a friend forwarded an ad from Moon guides, about the new (at that time) Metro series and the New York guide they were hiring for. I was assigned to write the hotels section. After that job, and writing a Metro-style Amsterdam guide for them, I was able to approach other guidebook publishers, and it snowballed.

I’m wrestling with that right now—travel writing, particularly guidebook research, is tiring, and I’ve been doing it since 2002. It’s not quite the dream job people imagine, and I’ve come close to burning out when I schedule too many books too close together—and my husband isn’t thrilled when I’m away for a month, then chained to my computer for a month, then away again…. But in the past year and a half, I’ve had a couple of really excellent jobs that have made me love it all over again, and the next thing I know, I’m checking my publishers’ schedules and scheming for another gig.

I was a little surprised that my guidebook assignments were basically unaffected by the recession, and they have been  steady despite all this talk about content shifting to the web. The publishers I write for keep talking about more online content, but it hasn’t happened yet.

So in the meantime, I decided to write my own iPhone app to Cancun, with a company called Sutro Media—just to see how the process worked and what was possible. From a research standpoint, it’s incredibly gratifying to do the work one week, then within a few more weeks, have it live on the web. And I can update it whenever I need to—right now for more print books, I keep update websites to let people know about changes, because it pains me so much to see information go stale so quickly. So I’m looking into doing more apps for places I know well, and I’m hoping some of the publishers I work for now start developing theirs as well, or at least using the web more to let readers know about changes to books.

And just from the standpoint of what I’d like to do, never mind the collapsing publishing industry: I would love to do more reporting on food in odd spots, even though the U.S. market for that is limited to a couple of magazines. A few years ago on a quick job writing about cooking schools in the Yucatan, I realized I am happiest when I’m traveling and learning about some new food combination, and hearing the story about how it came to be, whether through migration (Greeks expelled from Turkey, trade routes, whatever) or environmental necessity or some weird confluence of fashions—Dutch cheese stuffed with spiced meat in the Yucatan, for instance. Food carries stories, and I love to hear cooks tell them for me.

I’m not sure—guidebook writing has been a fairly rewarding path. I suppose I would have pursued more magazine work early on, as I now feel like I’ve slipped too far into the guidebook niche—sometimes it’s hard for me to think in more than 30-word bursts. And it’s the magazine editors who’ve moved more online, so it would’ve been good to have those relationships in place. The guidebook arena also seems to be closing up—few publishers are expanding their series, so it’s a tougher field to get into—another reason I wouldn’t pursue this to the exclusion of everything else if I were doing it today.

Pack light and think creatively about your story. Editors and readers want the arc of a story even in the tiniest piece of writing—writers who are good at teasing a story out of any material are the ones who will make a name for themselves. And be nice to your editors, of course. Also, keep up with developments like Twitter, Tumblr, etc. Blogging seems over as a way of making a name for yourself now—-it’s still good as a diary, but people just don’t read them they way they used to.

You’ve straddled the worlds of guidebooks and cookbooks, online webzines and big magazines, domestic and international. How have you gone about getting yourself hired in so many different ways and places?

The cookbook was a case of turning my hobby (cooking) into my job for about a year—I was lucky to have the personal, rather than strictly professional, connections to make that happen. I doubt I’d write another cookbook, but now I have a book agent and some ideas for future books. The best thing about being a freelancer is that I can follow any lead that interests me—if someone proposes an odd job or idea to me, or if I think of something and meet someone who might be able to help me, then it feels like it’s fated. So much of my employment has been through happenstance. Of course the flip side of that is that I’m never quite certain what the next step will be, and occasionally I get overwhelmed by all the potential opportunities I might be flubbing somehow.

Perhaps the most concrete thing I’ve done over the years is tell myself, “Just apply and see what happens.” Initially, I was very methodical and pursued one thing after another, because I was worried that having one job work out would then make it awkward if other jobs came through. But that meant I had basically no work, as the publishing world works at a glacial pace, and sometimes the most promising leads just evaporate. So now when I find myself hesitating, thinking, “Oh, geez—what if I really do get that Albania/Caribbean/Switzerland gig?” I just make myself go ahead with the email. It’s a question of throwing out a million things and hoping one or two stick—and I now keep a log to keep track of all the ideas and applications I do.

For the unlimited budget: I guess Paris, even though it’s what everyone would say. I actually am not crazy about French food—or, more accurately, I kind of dislike the French for having made themselves the bosses of food, and the world seems to have fallen for it just because they use so much butter. (Don’t get me wrong—I love butter! But it’s a one-trick cooking pony.)  So I hesitate to spend any real money there because I think I might be disappointed (if one can be disappointed and proved right at the same time). So, what the heck—sign me up for all the ridiculous formal French restaurants, and pour me all the wine. Maybe I’ll be converted. And I finally won’t feel like I spent five years in high school and college studying French for no reason.

For the $20 budget, I would go right back to Bangkok. I went for the first time in January 2010, and it totally blew my mind. I mean, I’d heard that Thai people are into food, but no one had ever explained to me just how insane they are. It makes the French seem pretty weak, really. My husband and I often just started laughing at how much food there was on the streets. We were there more than a week, and I feel like we barely scratched the surface—I mean, we only ate in a sit-down restaurant twice. It’s the kind of place that makes me want to know and eat everything. Now if only I could do more than point and smile and give a thumbs-up…

For more info and a complete bio, check out the links below:

The Rough Guide to the Yucatan