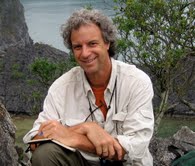 Jeff Greenwald’s gumption for ethical travel shines through in not only writing but also through his conscious commitment to leaving behind nothing but footsteps and good stories.  Jeff—whose 30 year writing career has taken him to the most eccentric of places—makes sure that whether he’s writing about the Nepalese revolution or covering electric baths in Japan, he does it respectfully, curiously, and beautifully.  His newest book, Snake Lake, was published this year.  See his complete bio and website here and enjoy his journeys the way Jeff does—with a healthy dose of cynicism and compassion!

My first published story was about my brief but memorable episode as a volunteer water engineer (!) at one of the Cambodian refugee camps along the Thai border, in November 1979. I wrote that up for a weekly newspaper; today it appears in my anthology, Scratching the Surface. It was well-received, and gave me a real taste for photojournalism (I’d previously been a visual artist). From there I wrote for larger regional markets — like Via and Santa Barbara Magazine. When I received a journalism from the Rotary Foundation in 1983, I moved to Kathmandu and began publishing stories in GEO, Islands and so on. Living in Nepal I was able to work hard, and developed a reputation for strong reporting skills, attention to detail and—maybe most importantly—a sense of humor.

I have no idea how much travel writing will be a part of my career one year from now, let alone three! With any luck I’ll sell another 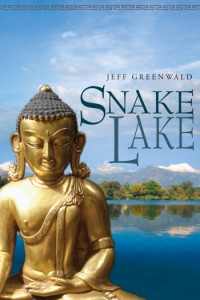 book, and can step out of the freelancing circus for good. As for the changing landscape, well, I’m naturally a bit distraught to see the way things are going with “content farms” and the devaluation of the writer’s craft. I do find myself promoting my work and events through social networks, and spending an inordinate amount of time online, rather than focused on the thing that makes one a writer in the first place.

Perhaps I’d have spent a few years living in New York City after my first long-term visit to Asia, in the mid-1980’s…. New York really is the center of the publishing world, and long-term success depends in some part on being very familiar with those outlets and making personal contacts at some of the Manhattan-based magazines. Still, I made many terrific friends and connections in the SF Bay Area, and have no regrets.

Sorry… my best advice is “Don’t do it!” But If you are not to be discouraged (a job requirement, believe me), you might begin by starting small, with front-of-the-book sections or columns. Write about colorful, specific subjects in which you have expertise or take a strong personal interest.

Although this certifies me as ancient, I read your Shopping for Buddhas book way back when it first came out. Now you’ve come full circle with a new book set in Nepal. What’s this one about?

Snake Lake is set in Kathmandu in 1990, only two years after Shopping for Buddhas, but what a totally different book it is. The story—a memoir of three months of my life, from mid-February through mid-May—unfolds during the Jana Andolan, Nepal’s first big “people power” revolution. The Nepali people, inspired by events in Eastern Europe, decided it was time for them to overthrow their useless, greedy king. I was in Nepal, covering the story for a San Francisco newspaper. At the same time, I was being introduced to Buddhist philosophy by a very funny and charismatic young lama named Chokyi Nyima Rinpoche. He’s a big character in the book — along with a spunky photojournalist, who was my lover.

But there is a shadow side to the story, as well. While all this was unfolding my younger brother Jordan, back in the U.S., was descending into a deep and dangerous depression. Though I came back to the U.S. in the hope of helping him, I was too late. 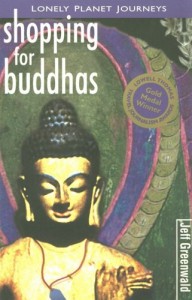 It wasn’t until some time afterwards that I realized that the three main themes in my life during of that wonderful, terrible time – revolution, Buddhism and suicide – can all be seen as paths to liberation. I decided to weave them together into a single book. It was quite a challenge.

I might add that the title comes from Nepal’s strong tradition of naga, or sacred snake, mythology. All of Kathmandu Valley used to be a huge inland sea, populated by a race of snake gods. When the Valley was drained they fled, relocating in small nag pokharis – snake lakes – around the area.

You write books and articles; you’re continuing your one-man show on stage in January; you’re the co-founder and Executive Director of Ethical Traveler; and you’ve worked with Seacology and Mercy Corps on conservation and humanitarian aid issues. What’s next in the Renaissance Man series?

I have a couple of book ideas I’d like to pursue, if I can get a publisher interested. I’d like to write about the importance of risk-taking, and the pleasures of breaking out of one’s comfort zone. And I have a very interesting and inspiring idea that I hope to discuss with the Dalai Lama, but that must remain a secret for now. And, of course, I’d love to see my stage show—Strange Travel Suggestions— reach a wider audience. If any of Perceptive Traveler’s readers are theater agents, I’ll be glad to invite them to my January 2011 run at The Marsh Berkeley!