I’ve got a special kinship with Chris Epting since one of his Perceptive Travel stories got into the anthology Best Travel Writing 2009: Let’s Spend the Night Together. This prolific writer is the only person I can think of who’s on a first-name basis with Fred Willard and Sally Struthers. See the whole rundown at the end of this interview or visit his website here!

You have one of the most amazing histories of any writer I know and your background could fill a whole book. In fact it does! How have you managed to cram so many interesting experiences in that you could put out the autobiographical Hello, It’s Me before the age of 50?

I think a lot of it has to do with the fact that I’m naturally curious about lots of things, so I tend to get highly intertwined in the subjects that fascinate me. For me, the best way to experience something or someplace or someone is firsthand, so I’ve always tried to get involved as much as I can with my personal passions. That’s helped me as a writer as well because it’s allowed me to present various scenarios with an insider’s view; a backstage perspective that hopefully reveals more details and sheds more light for the reader.

You’re the personification of someone who has carved out a definitive niche and made a name for yourself in that area. What has come out of being known as “the pop culture landmarks guy?”

I hear from some of the most interesting people. A great byproduct of what I do is this getting to hear from kindred spirits. People are so willing to share stories, artifacts, anecdotes – I think because they appreciate books that perhaps have made their travels a bit more interesting or easier. I’ve also learned about a lot of places I may not have discovered soon, or ever, thanks to people that want the world to know more about something in their backyard and who trust that I might be able to deliver the story effectively. Another thing I enjoy are invites to go out and speak about offbeat landmarks and places off the beaten path because you finally get to see who you are writing for. I get plenty of emails and things, which is great, but meeting readers firsthand is a good way to put a face to your audience and interact in a more meaningful way.

But I’d say that the best opportunity I’ve received based on the books I’ve written is, since 2004,  being the national spokesman for the Hampton Hotel Save-A-Landmark program. We’ve helped save and refurbish dozens of landmarks around North America which I’m extremely proud of.

How did you get started down that path to start with? 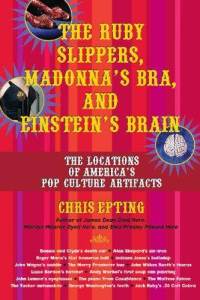 Since I was about 7 or 8 I’ve found it extremely compelling to stand in the exact site where something odd or historic happened, along with tracing the footsteps of historic figures. In many cases, I noticed that sites were not marked with a plaque or marker so I thought a book detailing all the places we might cross each day, oblivious to the history, might be interesting. Even if nobody read it, at least I’ve have my own personal guide and reference.

Fortunately, there seemed to be an audience for this particular “hobby” of mine and so the first book, James Dean Died Here, evolved into a series of many book along the same line. Initially, my research, photography, etc. was something that truly was a hobby, and after many wonderful family road trips I’d amassed a serious amount of material. So in my late 30s, I decided it was finally time to take a shot, before it was too late, to embark on this next chapter in life. And I’m very glad I did.

I’m amazed at how many books you’ve been able to write over the years. How many are you up to now and how do you manage your time while still having another job and a family?

To date, I working on (I think!) my 19th book. I do tend to work fast and a lot of my disciplines came from my career as a copywriter and creative director in advertising. I’ve created many ad campaigns, written and directed literally thousands of commercials, so I’m used to getting a lot done in short amounts of time and juggling many intense deadlines at one time.

As far as another job, while I still write commercials from time to time, most of my work time today is actually spent on my books, and journalism, which was a direct outcrop of my author career. I write at least 100 articles a year for a myriad of publications, on subjects that all seem to fall out of the sorts of books I’ve written – travel, history, music, sports, etc.

As for family, they are what has inspired pretty much all I’ve done as a writer. Our travels, our experiences, the people we meet – the sum total has provided our kids with a unique, exciting view of history and the world. Much of what I’ve done the last 10-15 years starts with the notion of, “I wonder if the family would like to do this?”

What advice would you give to someone near and dear to you who wanted to become a travel writer—assuming they had zero credits to their name? 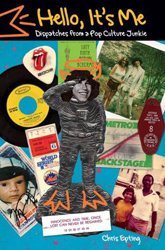 Decide what secrets you’re going to reveal to the world – and then set about telling those stories – because it’s all about telling stories. Not rambling aimlessly, lost in a place, but delivering a beginning, middle, and end, every time out.

Travel writing, like most other non-fiction, seems to succeed best when the reader is exposed to some new truth or revelation – a place, a person, a taste, a sound – so wherever your passion lies, allow it to let you develop a simple, truthful voice that readers will look forward to discovering. When they start to associate you as a force that can transport them, teach them, enlighten them – then your stories will resonate and, all of a sudden, all of that pitching will pay off. Someone will contact you and ask, “Would you be interested in contributing to our publication?” And in that moment, you’ll know it was all worth it.

A pop culture history aficionado, Chris has a lifelong penchant for documenting the exact sites where things both great and small occurred. As an author, Epting has found that unearthing and chronicling ‘hidden’ locations offers him a challenge. What began as an inquisitive hobby soon developed into the writing and photographing of 16 books based on his discoveries, including James Dean Died Here, The Locations of America’s Pop Culture Landmarks, Elvis Presley Passed Here, Even More Locations of America’s Pop Culture Landmarks, Roadside Baseball, The Ruby Slippers, Madonna’s Bra, and Einstein’s Brain: The Locations of America’s Pop Culture Artifacts and Led Zeppelin Crashed Here. In 2009, The Early Polo Grounds and The Birthplace Book were released. He has contributed articles for such publications as The Los Angeles Times, Westways, Travel + Leisure and Preservation magazine, and recently started writing a weekly column for the Huntington Beach Independent newspaper. He has also contributed to Perceptive Travel and Luxury Latin America.