“Rory MacLean must surely be the outstanding, and most indefatigable, traveller-writer of our time,” wrote John le Carré. According to late John Fowles, his work “marvellously explains why literature still lives”. Rory’s 14th book, Pravda Ha Ha: True Travels to the End of Europe, marks the 30th anniversary of the fall of the Berlin Wall.

I first interviewed Rory on here in 2010 and he has written on North Korea, Transnisttia, and other spots at Perceptive Travel. It was time to catch up with him again.

You’re best known as an author and you’ve published a lot of well-regarded books over the years. Tell us about the latest one. 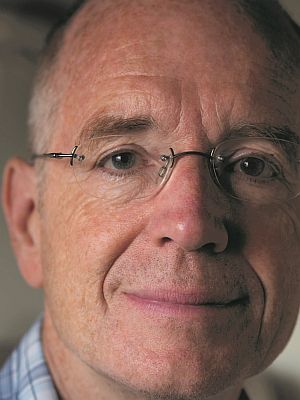 It’s 30 years since I made my original Stalin’s Nose journey from Moscow to Berlin, at the dawn of a new age. In 1989, Eastern Europe rose up against its Red Army occupiers and sent them packing. The fall of the Wall was followed by the collapse of the Soviet Union. Seventy years of totalitarianism ended almost overnight and most Europeans embraced the idea of a borderless continent, believing that they had changed the world.

Thirty years on, in my new book Pravda Ha Ha, I retrace my original journey, backwards, to ask how that optimism was squandered. What has become of our faith in the healing power of openness and reconciliation? Why—after that promising dawn—has the Kremlin redoubled its efforts to undermine Western unity? And how can so many of us now be falling for the populists’ lies and spin, dragging democracy to this precarious present moment?

Obviously the world of travel writing has changed quite a bit since the early ’90s and has changed more still since you and I first crossed paths in the ’00s. How has your approach changed? What is working for you as we head into the 2020s?

I’ve become increasingly aware of a writer’s responsibility. Of course we’ve always had a duty to truth and to the people met on our travels, often at risk to themselves. But now our responsibility extends to an awareness of climate change, of the damage tourism causes to the environment and—especially important for me—of untruths. I’m shocked by how easily, in our desire for clarity, people have fallen for simplistic sound bites and clever Facebook posts, how we have allowed our history to be co-opted by ambitious politicians.

That’s the central concern in Pravda Ha Ha. I wrote the book in a manner that makes the reader aware of how our behavior has been—and is— manipulated, so as to empower us to manage it ourselves. In our desire for clarity, writers need to write and to think in a plural way, to understand and to illuminate the true complexity of reality.

It takes a lot of dedication and big blocks of time to write a whole book. What’s your process and what do you do to stay focused on the big project?

My process hasn’t changed over the years. All my books begin with a feeling, a memory, a quest or an obsession. I start each of them by digging into myself. I pair emotion with curiosity, the inner world with the outer world. Then I feel myself into other lives.

My objective has always been to evoke empathy. In my work I try to access the internal worlds of living people who I’ve met or the dead who I want to portray. I imagine myself into their lives so that the reader can better understand them and their time. I use stories to draw the reader into another world. This dynamic—these interwoven parallel journeys across time and space—also compels me to think about truth. 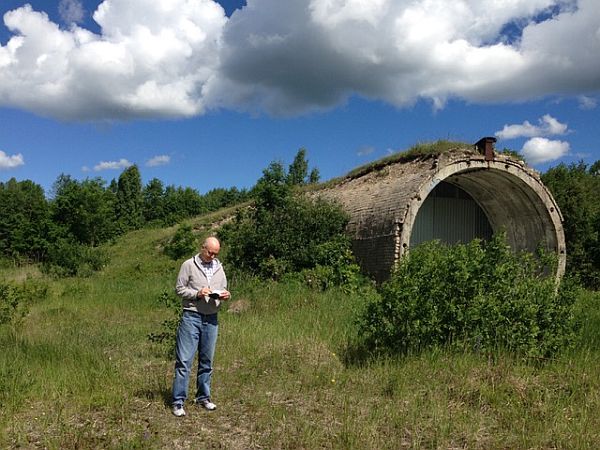 As for focus, it is a matter of discipline. Once my research trips are completed, I’m at my desk six days per week. I need about 15 months to write a first draft, and then six months to edit it. I keep focused as I believe my real traveling is done at that desk, in the intense distillation of the journey. It is back at home that I draw together experience and memory in an instinctive need to infuse the moment with meaning and value.

What does your income split look like these days?

I know no travel writer who survives only on his or her books. I, like my peers, combine extended writing with travel journalism, reviewing, radio work, and tutoring creative writing courses. These “extras” enable me to keep writing books, as they are paying the rent. Of course this means that I’m spreading myself over several projects, and so need more time to produce a book, but I’ve found—if one choses with care—that there’s a synergy between them, the ideas and concerns of one project feeding into another.

As an editor, I’ve got some rather strong opinions on what most travel writers do wrong, but I’d love to hear your take. What could most writers and bloggers be doing better? 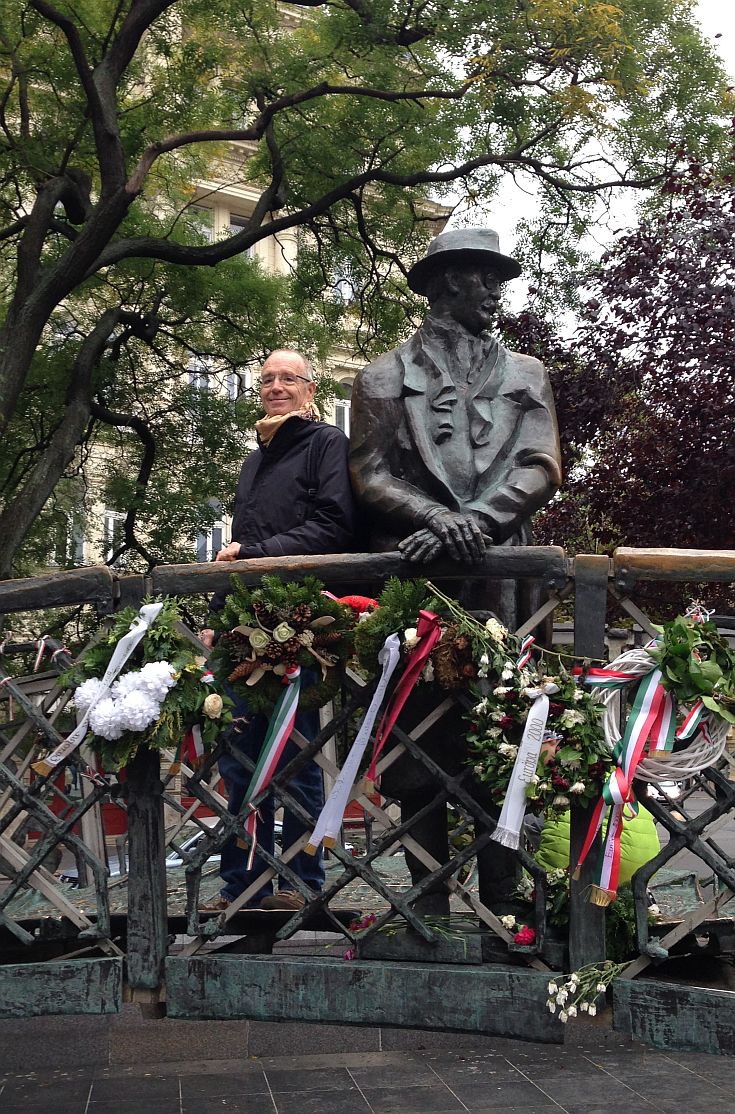 With statue of Hungarian hero Imre Nagy, since removed by the authoritarian government

In our discovered world, the individual travel writer’s unique perspective is of the greatest value. We have the opportunity to mark our one-and-only life, to record something important about the people and places that touch us. But hand-in-hand with this must go humility. To my mind a writer needs to be open, impressionable and, above all, to see themselves as a conduit, not saying to their readers look at me but rather look with me at all these things which are so much bigger and more important than me.

What are you most proud of in your body of work?

When I began my second book, I worried that I was repeating myself, even though the subjects of the first and second books were completely different. It was only later that I realized that common themes appear again and again in my work: individual responsibility, timidity and courage in the face of oppression, a desire for clarity and connection, the flaws in memory, and the desire to speak for those who cannot speak for themselves. In my books I want to engender empathy, to enable readers to step over a border and so to draw together—on the page at least—our divided worlds.

So I suppose I’m most proud not of any one particular book but rather of the constancies across the span of 14 of them. 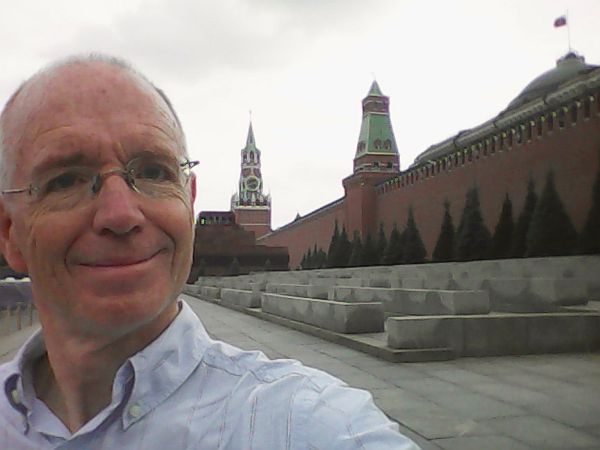 And your future goals?

Thirty years ago I traveled with the certainty of a young man, living by certain principles, prizing certain values. Over the decades those certainties—those ethics—have sustained me, and I’ve continued to live by them as much as possible. But in 1989 eleven countries had border walls or fences. Today there more than 70 around the world. At the dawn of another new age, I—we—need to find a way to keep faith in tolerance, empathy and the promise of the future. 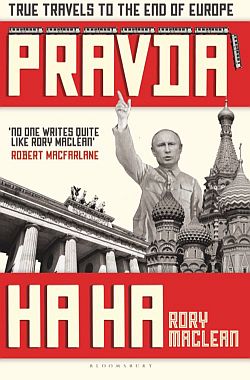 Rory MacLean is one of Britain’s most expressive and adventurous non-fiction writers. His books—which have been translated into a dozen languages—include UK top tens Stalin’s Nose and Under the Dragon as well as Berlin: Imagine a City, “the most extraordinary work of history I’ve ever read” according to the Washington Post, which named it a Book of the Year. He has won awards from the Canada Council and the Arts Council of England and was nominated for the International IMPAC Dublin Literary prize.

In his humanitarian work, Rory has written about the missing civilians of the Yugoslav Wars for the International Committee of the Red Cross, on divided Cyprus for the UN’s Committee on Missing Persons and on North Korea for the British Council. In addition he has blogged a quarter of a million words for the Goethe Institut and made over 50 BBC radio programs. He is Fellow of the Royal Society of Literature and a former member of the Executive Committee of EnglishPEN. See more at www.rorymaclean.com.