At the age of two Cory Lee was diagnosed with Spinal Muscular Atrophy (type 2), but that certainly never diminished his desire to explore the world. Just before he graduated from the University of West Georgia with a degree in Marketing, he launched Curb Free with Cory Lee because he wanted to share what he had learned on the road. Since starting his blog in December 2013, Cory has gained more than 50,000 engaged and supportive followers, traversed 6 continents (his life goal is to visit all 7… just Antarctica left) and became the leading travel blogger focusing on accessibility. He joins us this week to share his inspiring story.

Growing up in the small town of Lafayette, Georgia…and especially being confined to a wheelchair, did you ever see yourself as a world traveler? And what initially sparked your interest in travel?

I think that I have always seen myself as a traveler. My mom raised me as a single parent and worked in a school when I was younger, so during the summers we would travel to places like Washington, DC, Disney World, NYC, and other cities along the east coast. When I turned 15, we went to the Bahamas and that was really the first time that I experienced another culture. I loved trying the different foods, meeting the locals in the markets, and seeing how different Nassau was than the USA. That trip was sort of the turning point where I realized that I needed to see what else was out there. If the Bahamas was this different, I wondered what South Africa or China or Israel might be like. I made it my mission to save every dollar that I could and travel as much as possible. The next summer, I worked in a movie theater and saved up enough to go to Niagara Falls and then the next summer, I finally visited Europe. If you want something bad enough, you’ll find a way to make it happen. You received the Lowell Thomas Award for Best Blog in 2017. Congratulations! Please share with us how you started on the road to blogging success and what the journey has been like for you.

Thank you so much! My blogging journey started back in December 2013 because I was planning a trip to Australia and noticed that there wasn’t a lot of information about accessibility within Australia online. I wanted to create a website to share my travel experiences on and all of the information that I learned about each destination. Since 2013, my blog has grown beyond my wildest dreams and it’s now a full-time job for me. At times, it’s incredibly difficult, but I always try to remember why I started in the first place and that motivates me again. My goal is to show as many people as possible that they can travel, no matter what their abilities are.

You inspire so many people through the stories about your travel experiences…who inspires you and why?

I’m constantly inspired by other bloggers that are succeeding. Oneika Raymond of Oneika the Traveller now has some shows with Travel Channel and she is killing it! Also, Jon Morrow of Smart Blogger is in a wheelchair as well and can’t move anything but his face, but he’s built the number one blog about blogging in the world. There are so many other bloggers that are huge inspirations for me, but if I listed them all, this would be the world’s longest interview. Haha!

Aside from bloggers, another huge inspiration for me is the many wheelchair users that grew up when technology wasn’t quite as advanced as it is today. Four of my great-great aunts and uncles were wheelchair users. There were 13 siblings in the family and four of them had Muscular Dystrophy just like me. They didn’t have electric wheelchairs or even the medicines that are available today, but they were very ambitious and became known as The Wheelchair Singers. They toured all over the southern U.S. and put out a record, which I have today. I can’t imagine what it must have been like to use a wheelchair in that era, but they did it and became successful, and that’s shown me that with enough determination, you can accomplish almost anything. 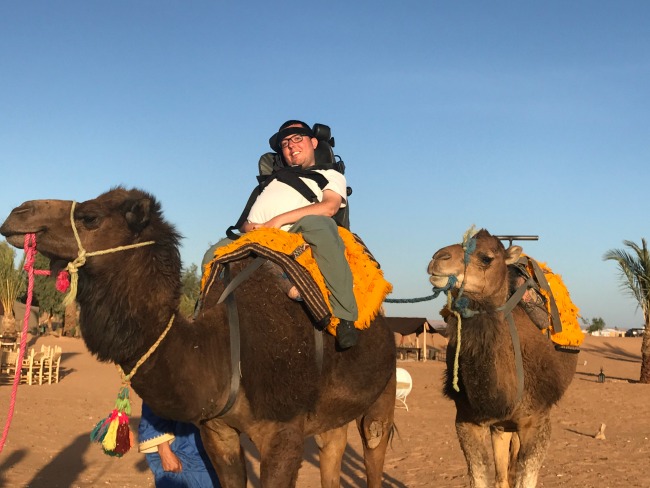 I’m sure you have plenty of adventures to share…and I’ve read many of them on your blog! If you had to choose 3 of the most memorable, what would those be and why?

The one that immediately comes to mind is when I rode a camel in the Sahara desert of Morocco. It was incredible and something that I never thought I’d be able to do, as it’s difficult for me to sit upright without support… especially when a camel is bumping along. However, a tour company in Morocco built an adaptive camel saddle and it had a headrest, seatbelt, and all kinds of other cool features. The ride was AMAZING and I’m pretty sure that the photo of me riding the camel will be my Facebook profile picture for the rest of my life.

Another adventure that I absolutely loved was hiking in the Amazon Rainforest. I went to Ecuador in January 2017 and a company that focuses on accessible tours there had a special off-road wheelchair for me to use. They pushed me through the rainforest in the chair and it was one of the most memorable experiences ever.

My third most memorable adventure (and by far the craziest/scariest) was meeting Jessica the hippo in South Africa. Jessica isn’t your ordinary hippo by any means. She was abandoned when she was little, but some humans found her and rescued her. They actually built a special bed for her in their house, widened the doorways so that she could go in and out as she pleased, and if you want, you can meet her. Jessica’s human dad handed me a sweet potato so that I could put it in her mouth, but it was difficult for me to reach over and give it to her. Jessica got a bit agitated that it was taking so long, so she lunged up out of the water, grabbed the entire side of my wheelchair with her massive teeth, and started pulling me into the water. Yes, it really was as terrifying as it sounds. Right before I became her lunch for the day, her human dad ran over and screamed for her to stop. Luckily, she was a good girl and listened to her dad, but it was the closest call ever. However, it did make for a very interesting blog post, so I’m not too mad at her for attacking me. What are some of your plans for the future in blogging and traveling?

As far as traveling goes, I’ll be visiting India this December for the first time. It’s a destination that I’ve always dreamed of visiting, but realistically never thought it’d be possible as a wheelchair user. Luckily though, there is now a company there that does wheelchair friendly tours! Accessibility is becoming more prevalent around the world and I can’t wait to see which destinations become accessible next.

In blogging, I’m really excited to host my second annual group tour in Iceland next July! I did my first ever accessible group trip in Morocco this past April and it was a big success, so I’ll be doing group trips where my followers can join me annually. Eventually, I may do 2 or 3 trips per year, but for now I’m happy with one. I’m also trying to form more brand ambassadorships instead of just partnerships that are a one-time deal. In 2019, I’m excited to be a brand ambassador for Allianz Travel Insurance and I have a couple others in the works as well! And lastly, I want to do a lot more speaking engagements next year. I recently gave the opening keynote at TBEX and it motivated me to speak more. I think, as someone with a disability, it’s important to be seen and put myself out there, so I’m definitely going to do more of that from now on.

Cory Lee has been featured on the Travel Channel, CBS News, Lonely Planet, in the Los Angeles Times, and many more. He also frequently speaks about accessible travel at conferences around the world. Connect with him on Facebook, Twitter and Instagram.