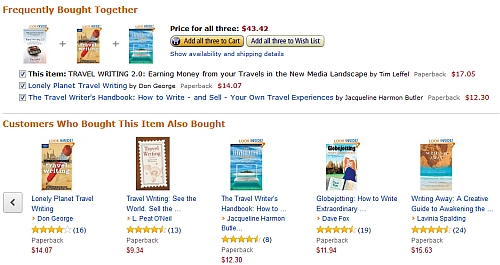 It’s the best time in history to be a book buyer or a book author.

For a bookstore owner, not so much.

There’s a great piece on Seth Godin’s Domino Project blog about the evolution of the bookstore since the end of World War II and how we got to where we are. The key point is, where we are now is a much better place. The long tail rules. Bestsellers aren’t the only books that sell. Authors with a following don’t need an agent. Or a publisher. Or even to be in physical bookstores.

Why Amazon is Good for Almost Everyone

The reason all this is good for authors though is it’s good for readers. I remember the first time I couldn’t find a book from a local author in a Borders store and they said they could order it to be in a week later. “Well, I can do that by myself,” I thought. “Plus I’ll get the book faster and for less.”

A lot fewer books end up in landfills as well. The former distribution system was utterly preposterous, with books sometimes getting returned by the truckload and becoming trash—often after making several round trips between stores and the warehouse. (I once did a book signing at two Borders stores in Nashville. The one near the University sold out that day and kept selling copies. The one in the suburbs was a complete bust. But the suburbs Borders couldn’t send those unsold copies to the university store without them first going back to a central warehouse.) Now it’s easy to adjust to demand and react, with much less guesswork.

The main reason Amazon is a good thing though, the reason we should all cheer, is people are buying more books. As magazines and newspapers continue their sad decline, book sales are increasing rapidly. Part of this is due to the Kindle taking off—people buy more books on impulse when they can get them immediately and carrying all of them when they travel—but also because finding what you really want is so much easier. And the recommendation engines are better than most human bookstore clerks were. Big data trumps any one person’s reading abilities.

Nobody likes a monopoly and you could argue that Amazon is looking like one. Unlike Google though, they seem to be a mostly benevolent monopoly, putting the consumer first instead of putting their revenue targets first. They also treat authors really well, giving us a royalty rate several times higher than even the best-selling blockbuster author used to get from a NYC publisher.

If you’re a reader that misses a local independent bookstore that’s gone away, I understand. It’s sad to see them go. As Seth points out, the ones that have adapted are social meeting places as much as places to find books. For authors and book lovers though, it’s hard to look at how good we have it now and not think this is progress.

Want to get great travel writing advice in your inbox each month? Sign up for the newsletter.