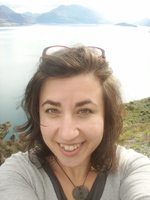 Alison Stein Wellner has been a contributing editor at Inc. magazine, editor-at-large at American Demographics magazine, a New York Times Professional Fellow and a National Press Foundation Fellow. Her articles have won awards from the American Society of Journalists and Authors and the American Society of Business Press Editors. She also spends quite a bit of time blogging about travel.

You and I first talked years ago when you interviewed me for an article you were working on for Inc. magazine and we veered off and spent half the time talking about Honduras if I remember right. Did you gravitate from business writing to travel writing because you could get more excited about the travel? Or was it just because magazines suck?

Ah misty watercolor memories…So that Huffington Post piece you’re referring to was a cri de Coeur which I wrote after a particularly dreadful experience with a woman’s magazine — it wasn’t about Inc., I’d actually stepped down as a contributing editor there at least a year before I wrote that screed. My move to travel writing was more of a pull towards travel (and a travel-centric lifestyle) than it was an aversion to writing about business. I still find money inherently interesting.

My change in subject focus coincided with a shift from magazines to web-based publications. I *was* incredibly tired of the typical magazine editorial m.o., which is highly pre-determined by editors. I’m all for smart editing, and I know my work has been much improved by the few smart editors I’ve worked with over the years. But “smart” isn’t the adjective I’d use for the editorial process at many magazines, and that still makes me sad. I love magazines, and I wish they were better.

You’re the subject of this interview but you’ve also been interviewing other travel writers for the Perceptive Travel blog. Anything you’ve found eye-opening in those conversations?

If you look at the interviews I’ve done so far as a whole, for me what emerges is that travel writing is so idiosyncratic. There are many different ways to travel, and to attack writing about that travel, that result in a strong piece.  Over the years, I’ve found that writers, no matter their level of experience, tend to be insecure about their process. These interviews underscore that the real challenge for a writer is just to find a process that works for them.

I sort of sidled into travel writing, I had many years under my belt of writing about other subjects  — I’ve been a full-time freelancer for 13 years, but have only been focusing exclusively on travel for the past three years. I was writing a lot for business magazines, so when I decided I wanted to focus on travel, I started to pitch travel ideas to business magazines. I focused first on business travel, then on luxury travel, and I kept going from there.

I think one of the keys to my success has been having lots of ideas, which comes from traveling, a lot.  I also think that you have to be willing to put yourself out there, pitch things around. And most of all: persistence. There are so many talented writers that give up and get discouraged while far less talented writers succeed because they are just relentless. It’s easier advice to give than it is to take, but never get discouraged. You need to be like one of those blow up dolls with the weight at the bottom, the ones that you punch and they spring right back up again.

from now? How will your income mix change and what are you doing to adapt to the changing media landscape?

I think this is a very exciting time to be a writer, since we just don’t know how the publishing world is going to shake out. I feel like the shift for me happened in the past year or so — moving from almost exclusively print to almost exclusively online, and so I imagine that I will continue to do a lot of what I’m doing today.  I just think that I will get paid more for it, as publishers figure out how to make the economics work.   In terms of what I’m doing to adapt — I’d say my job has totally changed in the past two years.

My job used to be only about the words themselves — having ideas, reporting the story, writing the story, sending it. Now I’m my own photographer and stock agency, I’m dabbling in web design, I’m coding, I’m doing all of these things that someone else used to handle. I’m aware, in doing this, that I’m making myself a far more valuable player in the publishing world — especially since I’m doing all of this without getting paid any extra for it.  As I said before, I expect that last bit to change as the economy picks up and advertising dollars return.

1- Travel as much as possible.  2- Write as much as possible and publish by any means necessary.  3- Be a good schmoozer (which is something I personally dislike, but it’s hard to avoid it and make a living.)   That’s been my advice for years, from the 2.0 perspective, I would say that learning the basics about photography, web design, and HTML coding are rapidly becoming mission-critical. When I wrote for magazines, I used to have an art department backing me up — sourcing photographs, handling page layout and so on, now, I’m doing all of those things. (And I have to say that I rather like it.) The reality is that earning a living as a writer has never just been about the writing itself, as much as I think many of us would like it to be.

I would first ask why Near and Dear wants to be a travel writer. If it’s for the money, well — first there are better ways to make a buck than being a writer, period, and second, there are other subjects to write about that are more lucrative than travel — I made much more money when I was writing about business, for instance. I would also ask whether Near and Dear likes to travel. It’s surprising to me how many people want to be travel writers and don’t want to leave the house.