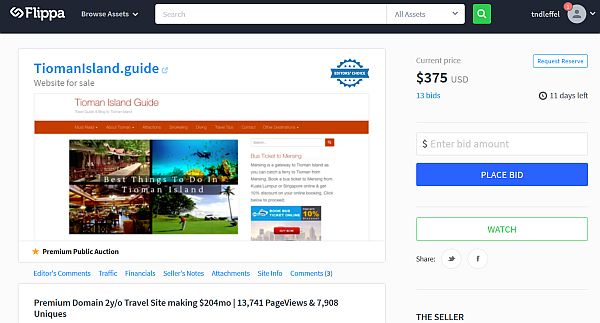 Almost any successful blogger will tell you to be prepared to put in six months, a year, maybe two years before you start making real money from a travel blog. There’s just no way to speed up the process of building a following, showing up high in the search engines, and developing a brand on social media.

That advice assumes you start from scratch. But what if you skip the whole first two years by buying a site that’s already established?

That’s what Max Hartshorne did when he purchased GoNOMAD about 16 years ago. He still recommends that as a great way to hit the ground running.

People sell websites and blogs every week on the likes of Empire Flippers, Latonas, and Flippa. Some of the sales are by professional flippers. Just as in the real estate market, there are people who buy dumpy places, renovate them, and sell them. They take something old and ugly and make it look new so they can quickly sell it to another buyer.

More often, however, these sales are from people who just don’t want to run the site anymore. They got a full-time job. Or they had a baby. Or they just got bored with the subject matter and aren’t inspired anymore. Sometimes the seller just has too much on his plate and wants to scale back.

That last situation was mine when I sold Practical Travel Gear in the summer of 2015. I still enjoyed the angle (and the free gear) and it was profitable every month, but two posts a week and the admin were taking up time. I was working more hours than I wanted to be working each week and since this was a multi-contributor site that wasn’t at all about me, it was the most obvious one to sell.

The new buyers were passionate and excited about the subject and didn’t have six years of travel gear landing on their doorstep to get them jaded. So they bought the site, I introduced them to all my contacts at the Outdoor Retailer Summer Market, and they were off to the races. They’ve since put their own stamp on it and that’s fine. I took the money and they got the future of the blog.

Maria Haase spoke on this subject at TBEX North America in 2017 after purchasing her second travel site instead of setting up a new one from scratch. She talks about how she did it and what to watch out for in this Break Into Travel Writing podcast episode.

“When I started taking a look at this site for sale, Europe Up Close, I realized it was a real diamond in the rough. Unlike my original blog, it eventually enabled me to become a full-time travel writer.

It only took her five months to reach break even on her purchase and then after that she was earning a healthy profit from it.

What’s Available for Sale in the Travel Blog World

What can you find if you go hunting around on the auction sites right now? Well if you want a site already throwing off a hefty profit, you’ll usually pay somewhere between two and four years’ profit for it. So if a site is clearing $2,000 a month, you can expect it to fetch between $24K and $48K – the latter probably including a robust e-mail list and/or social media accounts with a good following.

There are plenty of bargains out there for savvy buyers willing to put in some sweat equity and patience, however. Maria made her money back in just five months after making major SEO improvements and other tweaks. Often people just get bored with their blog and want to sell. Or they stop traveling. Or they get a full-time job and know the quality is going to start declining.

Here are a few examples I pulled off Flippa this week. Most are listed as auctions, but these are ones with a “buy it now” price listed.

That last batch could still be interesting for those who want to skip all the design and theme setup work. If the architecture is already there and you’ve got some content in place, it’s really just a matter of getting backlinks and adding new content to get it to rank.

You could also take it upon yourself to find deals like this informally and skip the middleman. Is there another site you compete with in the rankings that is not regularly maintained? Do you know someone who isn’t going to blog anymore? Have you seen a blog that hasn’t been updated for three months and their social media accounts are quiet? Hit them up with an offer and your next blog could be one that’s already in motion, skipping a year or more of building work.

As someone who has started six blogs and sites since 2003, I wish I had done some of this when Flippa first launched. It would have saved me a lot of development time.