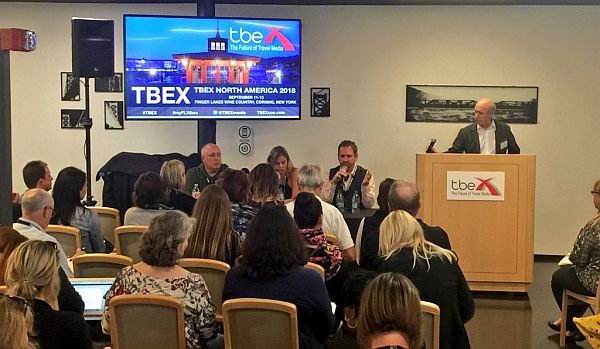 At the last TBEX North America conference I moderated a panel called, “What I Would Do If I Had to Start Over Today.” The idea was to bring together a few successful bloggers who have been doing this a long time and finding out what they would do differently now. If they had to completely start over, with no traffic and no following, how would they launch a new blog?

Here’s who you’ll hear on the recording below:

I was the really ancient one, having launched The Cheapest Destinations Blog in 2003.

I didn’t remember to hit the record button until after the intros, so follow the links above if you don’t know who these people are. Just know that they reach hundreds of thousands of real blog readers each month, plus that many and more through social media and newsletters.

Go straight to the audio here.

What you’ll hear first is them talking about what they did that worked in the past to get them past 10,000 unique visitors, then 50,000, and up from there. It’s a look at how you launched a successful blog a decade ago or more. Keep in mind that when many of us started, the platforms we’ve taken for granted now either didn’t exist or were still rolling out. The challenge was building traffic without the platforms–maybe the crutches–that we lean on to get the word out.

So the next round of the discussion went over what used to work but doesn’t anymore. The tactics mentioned include Stumbleupon (gone), posting every day (there’s too much saturation), leaning on Facebook (organic reach has gone down a lot), and sharing widgets. What worked then and works now is doing it for love at first, not money. It’s easier to try to monetize your site earlier now, but that doesn’t mean you should. Build a real audience first. “There are a lot more motivations to get into this business now. Then we had to just make it up as we went along,” says Dave.

What They Would Do Differently Right Now

If you lost everything and had to start over, how would you start from zero?

“I would build up a whole lot of content first,” says Dave. “Maybe five or six months worth of content ready to go. Then I could concentrate on my social channels. I wouldn’t have to worry about the content part of it. I already have articles ready and I can schedule those one or two a week. I would also just focus on just one or two social channels. Spreading yourself too thin is a big mistake. You will be less overwhelmed than by trying to be everywhere.”

Caz said she does have plans to launch a new site soon, so she will put this in practice. “The first thing I would do is niche focus. It’s very hard to have a broad focus. I’d also be 100% SEO focused. I would be researching, trying to figure out who my target audience is, seeing what they want, and checking out the keywords I need to include so I can get ranking. I would also be 100% e-mail targeted from the start.”

She did a solo presentation on advanced e-mail targeting and delivery. Even if you didn’t attend TBEX, you can find her slides on the TBEX LinkedIn page. She also emphasized the importance of good site deseign, specifically making it easy for readers to find what they are looking for. She would also do guest posts for others right out of the gate, do video from the beginning, and build relationships with other bloggers and the industry. Social media would come later on.

“I would not focus on Twitter. I would not focus on Facebook. I would focus on a YouTube channel,” says Gary, who started his blog in 2007 when it was difficult to record video with a regular camera. “I would focus on SEO and Pinterest. I would focus on real engagement.” He talks about podcasts, and how a podcaster connects for 45 minutes. The people who join his tours are mostly podcast listeners. “If you are starting out, you just need to get 50 people to follow you like a cult leader. If you can’t get that small number people to follow you passionately, you will never get 100,000. If you can get those 50 to care, they will spread the word. Have really deep engagement, possibly through audio or video.”

“I would spend 80% of my time doing guest posts and writing for other websites if I were starting over today,” he adds. “The other 20% would be on creating good long-form, in-depth posts for my own blog. Then over time I would gradually change that percentage until it becomes the reverse after I’m established. Then I spend 80% writing for my own site.”

“Never say no to an interview,” Gary said, which all of us agreed on. You never know what’s going to happen from that interview later or how big that person is going to become.

Listen to the rest of the session to hear the panelists talk about the power of couples who can share duties, creating a press/media page on your blog, mining message boards for article ideas, gaining authority, and how it baffles us that the PR industry pays no attention to our e-mail newsletters. Like this one!

TBEX runs 2-3 events per year around the world for travel bloggers and the industry. The next one will be in Billings, Montana in September of 2019. Thanks to Deb from The Planet D for the photo at the top!